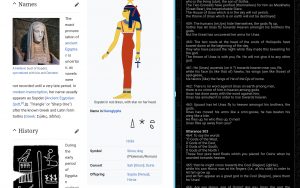 458: To say the words:
”Serene(?) is the sky, Soped lives (i.e., shines), for it is Unas indeed who is the living (star), the son of Sothis.
The Two Enneads have purified (themselves) for him as Meskhetiu (Great Bear), the Imperishable Stars.
The House of Unas which is in the sky will not perish,
the throne of Unas which is on earth will not be destroyed.

459: The humans (rm.tjw) hide themselves, the gods fly up,
Sothis has let Unas fly towards Heaven amongst his brothers the gods.
Nut the Great has uncovered her arms for Unas.

460: The two souls at the head of the souls of Heliopolis have bowed down at the beginning of the day,
they who have passed the night while they made this bewailing for the god.
The throne of Unas is with you, Re. He will not give it to any other god.

462: There is no word against Unas on earth among men,
there is no crime of him in heaven among gods.
Unas has done away with the word against him,
Unas has annulled it in order to rise towards heaven.

463: Upuaut has let Unas fly to heaven amongst his brothers, the gods.
Unas has moved his arms like a smn-goose, he has beaten his wing like a kite.
He flies up, he who flies up, O men!
Unas flies up away from you!”

465: that he might cross towards the Cool (Region) (qbHw),
while his son Horus was at his fingers (i.e., at his side) in order to let him grow up
and let him appear as a great god in the Cool (Region), place them for Unas!

467: Osiris has ordered that Unas may appear (xaj) as a second Horus.
These four spirits (ax.w) who are in Heliopolis have written it down in the register of the two great gods in the Cool (Region).”